What is Dissociation? When is it OK? Why Do We Dissociate?

If you’ve been around here for a while and read any of our other blogs, you know we’re not big fans of toxic positivity. We’re pretty honest when it comes to keeping it real, authentic, and truthful about what’s going on in the world around us and how we filter our environment through our brains. So, today, we are excited to talk about a buzzword that’s been floating around a lot lately, especially on social media. You may be here because you saw a video, like this one on TikTok, about dissociation and you wanted to learn more. Or maybe, you’ve just noticed yourself checking out a bit more lately and you’re wondering why. Either way, you’re not alone. Most of us have had to use dissociation at one point or another, to survive significant moments in our lives. There are not many humans in this world who have not experienced grief, loss, embarrassment, public humiliation, rejection, etc.

Regardless of what is going on around us, the ability to dissociate is quite a phenomenal way our systems show up to protect us. We’re finding in our practice that complex trauma and dissociative parts of self are at the root of what is creating so much internal conflict in people that is manifesting in things such as work/life balance issues, disruptions in relationships, people-pleasing tendencies, unhealthy eating or sleeping patterns, and the list goes on.

We’re going to talk about what exactly dissociation is from a psychological perspective, the ways we all dissociate whether we realize it or not, why we do it, and when we should be concerned about it. We’ll also cover a few fun facts here and there, just because facts are fun!

Before we dive in completely, let’s clear up some confusion. Two subtly different words can be used interchangeably most of the time. Dissociation and disassociation are basically the same things, except when referring specifically to the field of psychology. They both mean to stop associating or to disconnect. The big difference is that dissociation strictly applies to psychology and disassociation can apply to anything. Here are some examples:

In each of these examples, dissociating can be interchanged with disassociating. Barb is no longer connected or associated with her ex-boyfriend’s family and friends. Part of Joe’s routine is to have some alone time when he gets home. So, he doesn’t join in with his family activities right away. In both cases, Joe and Barb are still in touch with reality. However, in the following examples, disassociating would not work. The examples talk about becoming disconnected from reality or a person’s identity.

In each of these examples, both Bella and David have experienced specific trauma that led them to use dissociation as a defense mechanism. The option of simply disconnecting, or “dis-associating”, is not available when there is internal trauma. 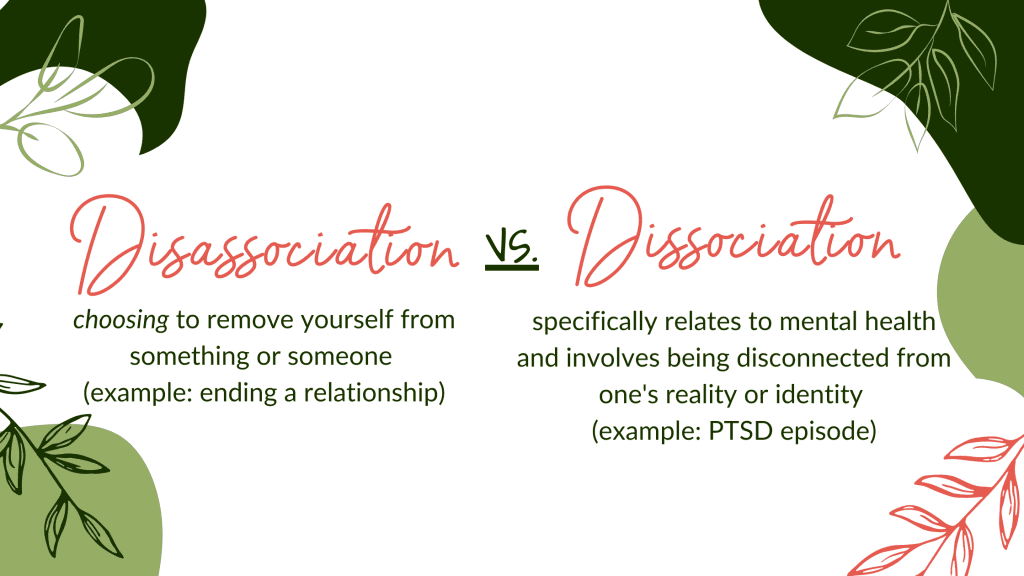 What is a Dissociation?

Definition: a defense mechanism in which conflicting impulses are kept apart or threatening ideas and feelings are separated from the rest of the psyche.

Our friend Dorothy shared the story of her aunt’s passing with us and permitted us to share it here. She and her aunt were very close. She considered her aunt her hero. This was the first time Dorothy had lost anyone close. She received the phone call at 5:00 am on a Sunday. She remembers hanging up and the words she said to her husband, as she sat there in her dark bedroom trying to grasp the fact that she now lived in a world without her hero. After this, Dorothy doesn’t have a clear recollection of anything that happened until the day after the funeral. Six days had passed. She and her husband had an event they had to attend for work on Monday. They flew across the country to be with her family on Tuesday and Wednesday, the funeral was Thursday. That was all a blur for her. She only remembers these days because people have told her about them. The next thing Dorothy remembers is having breakfast with friends on the way to the airport on Friday. When someone reminds her of something that happened during those six days, it’s like a bad dream, like it happened to someone else, or she just doesn’t remember it all.

Dissociation often occurs because someone has experienced shame or trauma and is rumbling with significant emotions. In Dorothy’s case, even though her aunt had been sick for a while, losing her was not simple. The best way she was able to cope with it was to dissociate from the experience. Grief, even when it’s expected, is never easy. Dorothy has never experienced any other bouts of memory loss, before or since. What she experienced the week her aunt passed away is a mild example of something called dissociative amnesia.

Other specified dissociative disorder (OSDD) – Considered a subtype of DID, but still designated a dissociative disorder in its own rights is Other Specified Dissociative Disorder. OSDD may be diagnosed when the criteria for the types of dissociative disorders do not fully apply. An example of OSDD could be when someone is faced with a situation and the person cannot resist responding emotionally. This can be expressed in anger management issues, social anxiety issues, depressive episodes, addiction, severe anxiety, etc. The four criteria for meeting OSDD diagnosis are:

Depersonalization-derealization disorder (DPDR) – Last on the list for dissociative disorders is depersonalization-derealization disorder (DPDR). This is the feeling of being detached from your body and a lost sense of reality. Extensive testing is required to diagnose a patient with DPDR. Lots of things can look like DPDR. Abuse of drugs, some types of seizures, depression, anxiety, PTSD, Borderline Personality Disorder (BPD) (not to be confused with multiple personality disorder). To meet the criteria for diagnosis of DPDR, a person must meet the following criteria:

Whether we realize it or not, we all use dissociation as a coping or defense mechanism. It helps us get through our day-to-day lives, ensuring that our basic needs are being met such as belonging, being loved, feeling safe, and controlling our environments around us. At times, it can also block us from being present in our daily lives, even though the intentions are pure and from a safety perspective, our brains cannot tell the difference between “then” and “now”. Oftentimes we are reacting in our day-to-day encounters from a place that kept us safe in the past but might no longer be applicable.  At times we are reacting as if “the house is still on fire” or “we’re being talked down to by our boss”. That very well could be happening, but it also may not be happening, thus the importance of understanding our own unique internal defense systems.

Some common ways that we all dissociate without realizing it are:

None of these things are inherently bad, in moderation. It can even be good for your mental health to zone out for a bit once in a while. Amazingly, we have this ability to disconnect but awareness is ultimately the key, as these survival mechanisms can cause harm to self and others if we do not understand them.

Why Do People Dissociate? 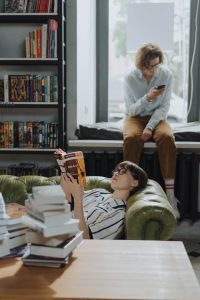 Since we all dissociate sometimes, it’s important to understand why we do it. From a broad perspective, it is because life is hard, and this world is constantly throwing curve balls. But let’s look a little deeper. If Identity isn’t your type of movie, another great one to watch that gives great examples of dissociation is Inside Out. Bonus, this one is family-friendly! The main character, Riley, spends the movie getting in touch with five of her key emotions: Joy, Sadness, Anger, Fear, and Disgust.

Dissociation at a deeper level is usually connected to individual shame or trauma and significant memories. We need to get in touch with those parts of ourselves that cause us to want to disconnect. The time Riley spends getting to know the different pieces of her personality in Inside Out is a perfect example of this discovery process. Oftentimes when we’re experiencing dissociation, there is an internal conflict going on. Our defense mechanism is to ignore the conflict and disconnect from the reality where that conflict exists. Don’t ignore it. This is where therapy comes in and is so helpful. From this perspective, it can change it all.

Dissociation itself is not a bad thing and can be healthy. It can literally save our lives. Like most things in life, it’s ok in moderation. Zoning out on social media is ok, in moderation. Daydreaming while driving, as long as you’re paying attention to the road, can help pass the time on a boring commute. Binge-watching your favorite show is a great way to bond with others who love the show. You get the point…it’s all OK in moderation. Just like Riley though, we need to make sure we’re staying in touch with ourselves. Ask yourself these questions and if you answer yes to the majority of them, it may mean that your dissociation is becoming more prominent.

If you did answer yes to any of these, that’s OK too. We’re here to help walk you through finding the parts of yourself that you may be missing or avoiding when you involuntarily dissociate. Therapy techniques like EMDR and the Progressive Approach are great ways to help you conceptualize and connect with those intrusive thoughts to understand that they are not happening right now. Reach out today to schedule a therapy appointment with a member of our Claibourne Counseling team.